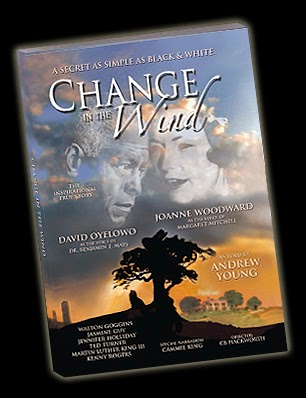 Several years ago, a limited edition DVD of Young's award-winning documentary, Change in the Wind, quickly sold out and became an overnight collector's item.

Now, the remarkable film has been remastered and is finally available again!

Click the DVD box above to order your copy today from our online store!

It's the little known, true story of Margaret Mitchell and Benjamin E. Mays, two people who lived in the same place, at the same time... but in very different worlds.

The story is brought to life through the voice talent of a remarkable cast, led by Academy Award-winning actress Joanne Woodward, as Margaret Mitchell.


She was white. He was black.

She had written a Pulitzer-prizewinning novel criticized for perpetuating racial stereotypes. He was one of the fiercest enemies of racism and laid the ground work for the Civil Rights movement in America.

Yet, for nearly a decade, the most famous author in the South corresponded -- secretly -- with the legendary president of Morehouse College... and eventually became one of the most important financial supporters of the traditionally black school.


Anonymously, Margaret Mitchell provided Dr. Benjamin E. Mays with funds to pay for the medical educations of dozens of promising African American men -- a story which slowly came to light decades later and was never fully been told -- until now.

While assisting Ambassador Young with "Change in the Wind," researchers at the University of Georgia (where Mitchell's papers are stored in a restricted collection) discovered previously unknown letters which fill in important gaps and explain the author's evolving view on racial disparity in Georgia and the South.


"Should be viewed by any and all who think racial conflict, or reconciliation,
is alternatively simple, or simply impossible.
An inspiring story."
- John Hope Bryant
Founder, Chairman and CEO of Operation HOPE


Tom Brokaw was among the well known television personalities who took part in a program honoring Ambassador Andrew Young with an Emmy Award for lifetime achievement, presented in New York on Feb. 25. 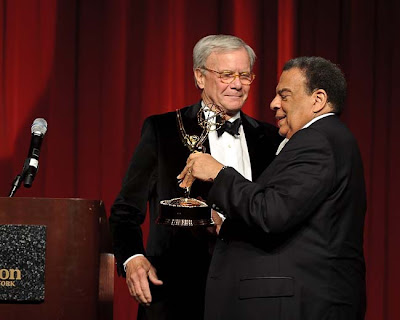 For more coverage and photographs of the black-tie, gala at the New York Sheraton Hotel & Towers on Feb. 25, click here.

Brokaw, who was a reporter at WSB-TV in Atlanta before joining NBC News, met Ambassador Young while covering the Civil Rights movement and has interviewed him many times over the years -- most recently for a profile in his book about the 1960s, "Boom!"

This Emmy, known as the Trustees Award and not given every year, is the highest honor that can be presented by the National Academy of Television Arts & Sciences (NATAS)

"Leaving Selma," is Andrew Young's two-part documentary about the historic 1965 march from Selma to Montgomery.


This true story chronicles the little-known facts surrounding "Bloody Sunday," in which peaceful demonstrators, led by John Lewis and Hosea Williams, were severely beaten by Alabama troopers on the Edmund Pettus Bridge -- an event that sparked outrage around the world and resulted in quick passage of the Voting Rights Act.

Molly Quinn, seen every week as "Alexis" in the hit TV series "Castle," is the latest Hollywood star to lend her name and talent to "Andrew Young Presents."

Molly provides guest narration at the beginning and end of "Leaving Selma" and "Stars Fell On Alabama" -- a two-part documentary about the historic 1965 march from Selma to Montgomery.

THE EMMY FOR
LIFETIME ACHIEVEMENT 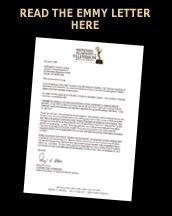 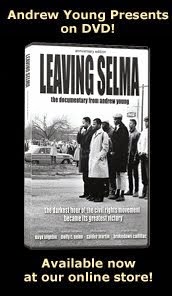 Andrew Young Presents
A quarterly series of television specials syndicated across the U.S. and focusing on positive stories overlooked by the mainstream media.